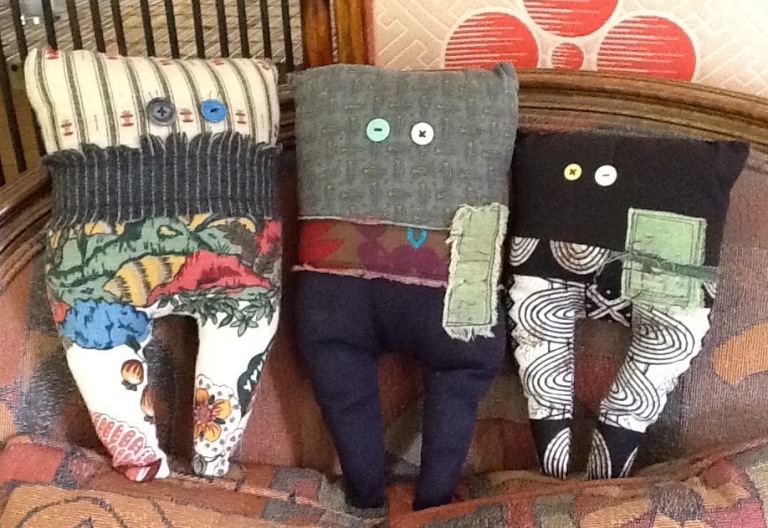 I began designing clothes for my dolls at age five with cuts from the center fold of the choicest fabrics from Mom’s exotic fabric stash.

Designing clothes is in air quotes.

Though made of fine fabric, they were extremely rude little dresses, many made for my troll doll. Typically, they were a rectangle that overlapped in back with a button to fasten, and holes snipped for the arms to go through.

Mom had a great eye for gorgeous textiles and stored them in one of the built-in closets on the second floor. By chance, I’d discovered the secret stash of voiles and taffetas and dotted Swiss, brocades, peau-de-soie, and bouclés, rayon velvets, and herringbone–and would go in there often just to run my hands over the stack of textures, eyes lingering.

I didn’t know it at the time, but the closet was more than space to store fabric. It was a space Mom had claimed just for herself.

We moved into the house when she would have been 23 years old and already had five children. I see that fabric closet now as having protected that part of herself that she would never give away. I recognize the importance of reserving such a space, as I have done similarly. Did I learn it by example? If feels so deep a part of my character.

By age six-and-a-half, she was teaching me how to use her sewing machine and at age eight I successfully put in my first zipper.

By age eight I had also learned to knit and crochet, embroider and cook. I thoroughly enjoyed preparing breakfasts for my whole family, replete with my own hand-embroidered, freshly pressed linen napkins, at full place settings (Currier & Ives!), including a multi-vitamin for each person. Though it would be several years before I mastered the art of coffee-making with the Sunbeam electric percolator, I did pour OJ for everyone, as they waited for me to proudly serve them their plate of scrambled eggs, bacon, and toast.

I was well on my way to becoming a fiber/textile artisan by then and I did enjoy taking a place within the circle of women artisans in my family, next to my aunts and grandmothers.

When they sat down on weekend afternoons to knit or crochet (or, in the case of my Italian grandmother, tatting), before or after the busyness of dinner preparations (especially on weekends), or when there was a bit of extra time (and no TV), Mom took up the mitten she was working on three double-pointed needles, and I, my loose, knobbly knitting.

Image credit: By yours truly–Hand- and machine-stitched monsters made from an assortment of vintage and modern textiles.