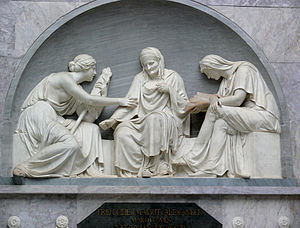 I had the very good fortune to be at the DeCordova Sculpture Park and Museum recently for a “creative conversation”, one of their free-to-members featured events.

This particular conversation featured Adrienne Sloane, a longtime knitting activist! She said that the work she’s been doing has largely been in response to what was going on in the world at the time.

Adrienne’s studio is at the Munroe Center for the Arts here in Lexington. One fine example of her work, “The Unraveling”, a work in progress, is a knit American flag against the backdrop of the United States Constitution, according to the timeline of the current administration. The piece is currently on exhibit at the Fuller Craft Museum in Brockton and also featured in Fiber Art Now Magazine.

We were a small group of individuals who came out to hear Adrienne’s presentation entitled, “Needling the Establishment: Knitting as a political act”. We had been invited to bring our own knitting to do before the presentation, or we could participate in a group knitting project, which involved “unknitting” some vintage knitted sweaters and knitting them into something new.

After about an hour, we moved from the couches to a small seating area for Adrienne’s presentation.

She began with a (very brief) history of knitting (which began in Egypt and the Middle East), showing a variety of thread and fibre images and where knitting had been placed front and center.

Adrienne talked about Lewis Wickes Hine (September 26, 1874 – November 3, 1940), an American sociologist and photographer who used his camera as a tool for social reform. Between 1904 and 1909, Hine took over 200 plates (photographs) and came to the realization that documentary photography could be employed as a tool for social change and reform.

In 1907, Hine became the staff photographer of the Russell Sage Foundation, photographing life in the steel-making districts and people of Pittsburgh PA for the influential sociological study called, The Pittsburgh Survey.