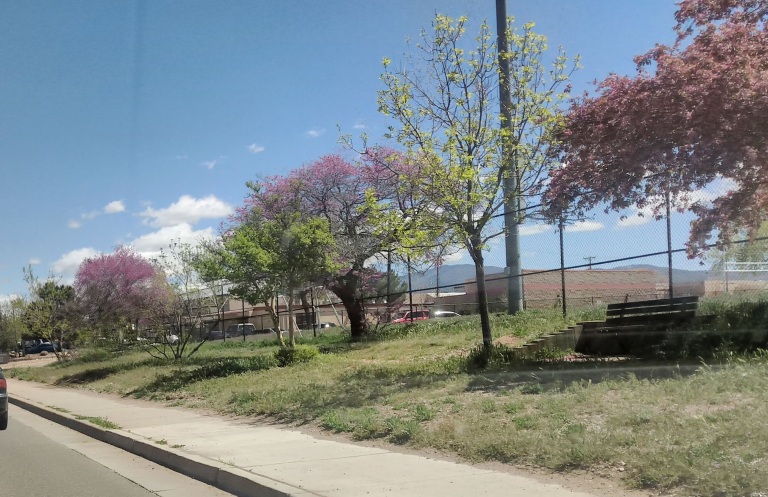 Left Georgetown on Tuesday morning, April 30. It was overcast and drizzled all the way from Andice to Lubbock and Sweetwater.

Learned about Palo Duro Canyon from Georgetown friends. It’s south of Amarillo by 30 miles, so I followed signs and spent the better part of the afternoon there. It is stunning.

Except for two, sad to say that all of the pictures I took of the canyon that day never uploaded.

Left Amarillo, cocooned in a dense fog. Ghostly structures appeared along the roadway.

Then the fog lifted, revealing a vast landscape of powerful energy-making turbines across long swaths of the Texas panhandle.

I’m not sure why this surprised me as much as it did. I hadn’t considered Texas a leader in wind energy, but wind is abundant here. Many fewer derricks than expected. They barely dot the landscape.

And then I entered New Mexico, where the landscape opens wide from the turbines of the high plains to a vast landscape with mesa that, like eyes in portrait paintings of yore, seem to follow you no matter your direction. Roads are long and straight, except where they curve, long and slow.

Long stretches where I am the only one on the road. Most of the way in TX was state road ’til I picked up I-40, the traditional Route 66.

I drove into Santa Fe, visiting the International Folk Market and a laundromat, before having dinner at a little restaurant and heading to Trinidad, Colorado for the night.

Two days of photos from the dash-cam don’t do justice to the landscape seen in person.