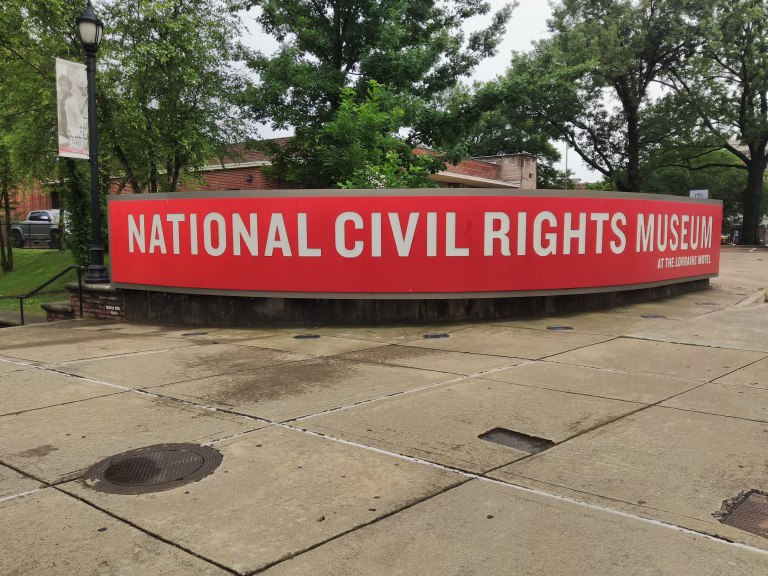 The morning was overcast and my drive to Nashville would not be a long one. So, I would have plenty of time to spend at the National Civil Rights Museum, housed at the Lorraine Motel.

From the on-site marker at the front door, I learned it was originally called the Windsor Hotel (c. 1925) and was renamed the Lorraine Motel in 1942.

It was one of only a few hotels for black people and the site of the assassination of Dr. Martin Luther King Jr. on April 4, 1968.

That made it a symbol of the civil rights movement.

A local non-profit group saved the Lorraine from foreclosure in 1982 for use as America’s first civil rights museum.

The museum includes access to the Boarding House across the street from the Lorraine, the site where the sniper waited to shoot Dr. King.

The Lorraine houses powerful exhibits that document, primarily, the struggle for civil rights in America for black people and people of color, women, and other minorities.

It also fully recounts the compelling history of the trans-Atlantic slave trade that began in 1619 and lasted 366 years. In that time it moved 12.5 million Africans across the Atlantic Ocean, the largest forced migration in human history.

During my visit on this particular Thursday in May, at least two school buses of teens (middle school-age, would be my guess), a tour-bus full of adults, and another dozen or so individual adults and couples were on-site, engaging with the exhibits.

The Boarding House and Museum’s exhibits are excellent. Special guests and lecturers are scheduled regularly.

I’m choosing not to post images of the exhibits on the blog and heartily recommend that folks make the trip to see them in-person sometime.